Gary Lemaster and his egg carving

He has been carving eggs for 27 years.  That’s him on the left in New Zealand right about the time he really became interested in art. So, he has been producing art in one form or another for quite a long time. 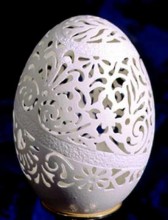 He had a scholarship in music to attend the University of Iowa, but turned it down to pursue a teaching degree at the University of Northern Iowa in history and English. Nope, not art. He is color-blind and although he continued to produce poetry and short stories, his visual art was limited to pencil, charcoal and pen and ink, which he practiced every day. He never took any art courses beyond art appreciation because he didn’t think he was good enough. He graduated with a teaching degree in Spanish and was offered a fellowship to be the first student in the new Master’s Program. The Viet Nam War influenced almost every decision young people made in those days and he opted to stay in school. He began grad school by taking 25 undergraduate Spanish students to Colombia to study and he both studied and taught while there. When they returned, he finished his Master’s degree and was promptly offered a sizable fellowship to study for his PhD in Spanish at the University of Iowa, which he could hardly turn down. So for 5 more years he studied languages (they had to have a working knowledge of six different languages) along with Spanish and Latin-American civilization, history, literature, linguistics, etc. As luck would have it, he’d taken more courses than he actually needed, but still had fellowship money left. 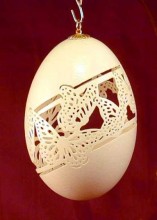 As you might guess, he hustled himself over to the Art Department to enroll in some beginning art courses, full of excitement and dreams. When he tried to enroll, they refused, saying that he was a grad student and, thus, couldn’t take undergraduate classes. The only possibility would be to take graduate classes in art, but he’d first have to be accepted and admitted, and for that to happen he would have to present a portfolio of his work to the graduate faculty who would judge him either worthy of them or not. With his lack of confidence, he’ll never know why he put together some of his work and stood before that stern-looking semi-circle of frowning faces. They asked him to leave the room and it seemed an eternity before he was called back. In fact, he’d almost fled in the meantime. When he stood before them again, he was greeted with smiles, handshakes and congratulations on being admitted. You could have knocked him over with a feather! He ended up knocking himself over with beer, he believe, but that was long before he’d quit drinking. Thus, he began taking graduate art courses and wished every day that he’d had enough confidence to have been an undergraduate art major to begin with, but life takes some strange paths at times. In any event, he thoroughly enjoyed every class he took. He has since won numerous awards for his artwork, especially for book covers and for his pencil and pen and ink work. Not for sculpture, though… he has never entered his eggs in any competition. Perhaps he will… someday. 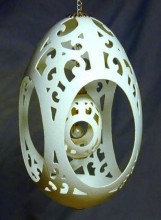 he very quickly became disillusioned with teaching at the college level – it wasn’t his cup of tea – but while working in Administration at the University of Iowa Hospitals and Clinics, the Art Director caught wind of what he was doing with eggshells and asked him to do a one-man show. It was unveiled on his birthday that Fall and he had a blast standing among viewers of the exhibition listening to what they had to say, until TV crews and newspapers had his face everywhere and he could no longer travel incognito among the onlookers. He sold a satisfying number of eggs and frequently, around Easter, some editor or producer would remember him and it would start all over again. 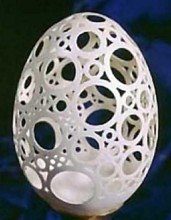 When his first website went up in 1996, he began getting 100 to 150 calls, letters or email messages every day from people who wanted to know how to carve eggs. He began writing a beginner’s book, but all of his kids were still at home and his wife and he were both involved in other ativities every night and weekend. At the time, he owned a Corporate Recruiting firm and was a National Sales Trainer on the side and he found it impossible to remain motivated about the book, but deadlines are good for him and he started The Eggshell Sculptor Magazine in 1998 so he could answer 100 questions once, rather than one question 100 times a day.